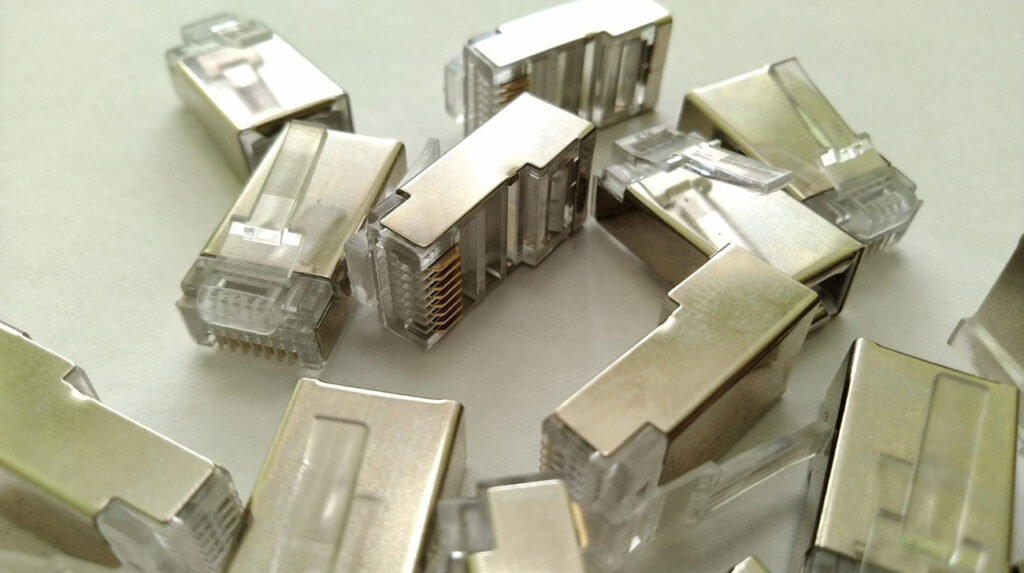 In networking, it is not only the cables that play a major role, but also the network connectors. There are different types of connectors that are used for different purposes. Below you will find an overview of the respective connector types in Ethernet cabling.

A connector is a device that terminates a segment of cabling or provides an entry point for network devices such as computers, hubs and routers.

These can in turn be differentiated according to their external appearance and connection characteristics. For example, there are plugs or sockets and ports.

Depending on the type of signal, the electrical connections must meet certain requirements. These can be connections that are protected against polarity reversal or the mechanical protection of the respective contacts.

Factors such as voltage or the level of current are also decisive factors in the manufacture and selection of connectors.

As a result, there are differences in the pin configuration, among other things. For example, there are DB9 and DB15 connectors, which have nine and 15 pins respectively.

Finally, network connectors are differentiated according to the type of electrical interfaces they support. Among other things, these can be purely data-bound (e.g. USB connectors), or they can also transmit graphic signals (VGA, HDMI, …).

So there are dozens of different types of network connectors in the IT sector!

There are always three components in network cabling. These are the two devices to be connected and the cable.

In order for the signal to get from one point to the other, pins are needed to make contact between them.

With the exception of various extension cables, the connectors usually have plugs at the ends. A basic distinction is made here between “male” and “female” characteristics.

While plugs or connectors are called “male” because of their external appearance, sockets or ports are “female”. Only when the plug is inserted into the socket, port or adapter can data be exchanged between the devices.

This results in many different standards and uses. Some connectors only transmit audio data or optical signals. Others are so-called modular connectors and are used in telecommunications.

When it comes to wiring network cables, there are two standards. The first is the T568A standard. This is primarily used in telecommunications technology in Europe. There is also the counterpart that is used outside Europe (T568B).

However, both standards determine which wires, for example in an RJ45 plug, are assigned to which of the eight pins. The exact differences will be explained in more detail later in this text.

Basically, one can distinguish between three types of Ethernet connectors. The first is the coaxial cable. These are two-pole with a concentric structure. Then there are the twisted pair cable connectors and the fiber optic cables. These also have twisted pairs of wires.

Their special feature lies mainly in the different connection technology. Not only do they have “male” end pieces with a classic plug. They also have rotating plugs or can snap into the socket. This gives them additional security.

When planning a structured network cabling system, it is of course important to use sufficient cable. In return, however, it must be ensured that there are enough plugs and sockets.

In the network area, in addition to fiber optic connectors, which we cover in a separate text, Ethernet connectors and coax connectors are the most common.

Most people will sure have come across the term RJ45 when wiring devices in a network.

But there are several types of RJ connectors. They are named after their number of contacts and their type of wiring they use. Here is a list of the most common network connector types:

A connector with four contacts that is typically used for telephone wiring. It can also be used for other low-speed communication applications. Click here to learn more about RJ11 connectors.

This connector is similar to the RJ11, but it has six contacts and is used for higher-speed communication applications.

The RJ45 connector has eight contacts and is used for Ethernet networking. It is the most common type of RJ connector. Click here to learn more about RJ45 connectors.

A connector with ten contacts that is used for serial communication.

This connector has 25 contacts and is used for high-speed communication applications.

Such an Ethernet connector can also be made independently. This is called crimping.

The patch cable is cut open at the end with a special cable knife. The individual wire pairs are then exposed. Depending on the intended use, these must have the same sequence at both ends of the cable.

For certain computer applications, a specific sequence must be applied. This is called a cross-over cable. The wires are then placed in the network connector and carefully pressed together with a crimping tool.

Is there a difference between LAN & Ethernet cables?

To make a long story short: There is no difference between a LAN and an Ethernet cable. In both cases, it is a twisted copper cable.

While the LAN by definition describes a specific area – several hundred metres – the Ethernet is about the type of cabling. In other words, the protocols behind it or the fixed plug connection. However, the two terms can be used synonymously.

The Registered Jack-45 network connector types are the most widely used in Ethernet cabling. They are also a cost-effective alternative to fiber optic cables. As a result, they are often mentioned in the same breath as “classic” network cabling.

What other types of network connectors are there?

For telephone plug connections, the RJ11 or RJ14 connectors are most commonly used.

The former has six contacts, of which only the two in the middle are used. There are no external contacts. It is usually used for cheap telephone plug connections on the terminal side.

In Germany, the RJ14 plug is classified as RJ11. However, this is not correct. The actual Registered Jack 14 has six contacts, four of which are used. It is also found in DSL modems or on hard-wired telephones.