Home / What is a LAN cable? Easily explained 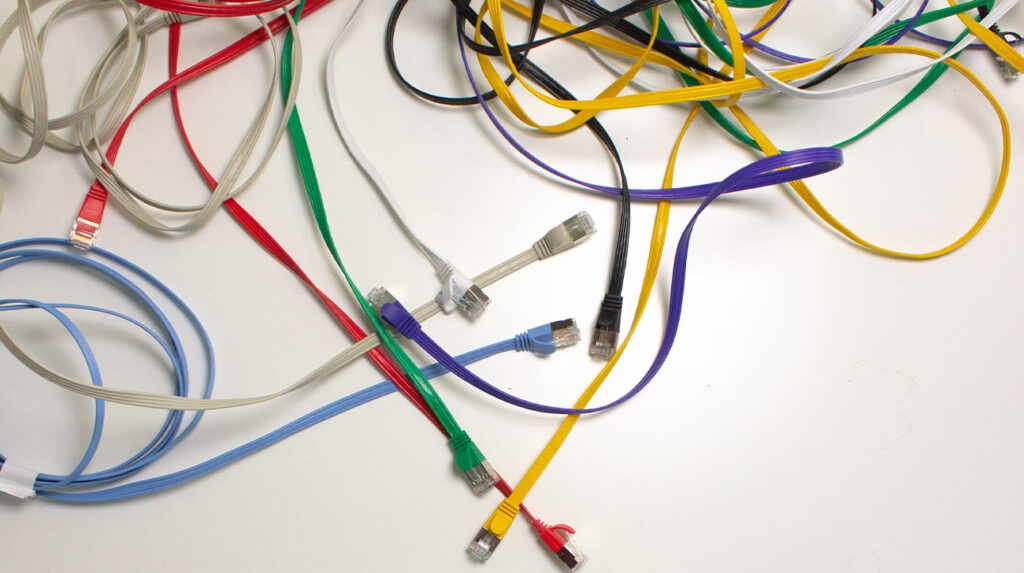 The idea of this article is to help you answer that question. In this text, we are taking a look at how Ethernet cables work, the technical differences, and advantages and disadvantages of LAN cabling.

What is a LAN cable? Briefly explained

A LAN cable is a conductor that connects devices in a Local Area Network (LAN) with a network connector. The network cable provides communication between several devices (computers, routers, switches,…). The term “LAN” is an overtake for Ethernet cable.

It was created in the 1970s by the XEROX company. Universities and laboratories were dependent on the interconnection of their computers and terminals already at that time. Employee Robert Metcalfe wanted all computers to be able to print from XEROX’s new laser printer. The local area network was born.

A lot has happened since the early days of LAN technology. We have already explained in more detail which standards exist today, which categories of cables, and which plug-in technologies are used and what an ethernet cable is.

What is a LAN cable used for and how?

First and foremost, such a LAN cable is used to connect devices within a network. It is a physical plug connection. Basically, any data cable that is used for communication between end devices can be called a network cable.

Some of them are particularly suitable for short distances. Their design can be particularly space-saving so that they can also be used in confined areas. Others are designed for longer distances or outdoor use.

However, all of these serve only one purpose: to connect devices to each other with a network connector. In addition to computers, routers or servers, peripheral devices such as printers or IP cameras also form part of the network.

For this purpose, a LAN cable is connected to a terminal device. The data reaches the other end device via a LAN distributor. Of course, this must also be integrated into the network.

From the outside, a LAN cable looks very similar to a telephone cable. It is also covered with a plastic sheath. The most common colors are blue, orange, yellow or gray. Inside are the eight different strands. These are in turn twisted into four pairs of wires.

However, the network cables have one outstanding characteristic. They look the same at both ends. There are RJ45 plugs, which are rectangular in shape and often have a small nose with which the plug locks into the ethernet port.

Furthermore, the plugs have a small light built in. Depending on the light signal, this can be used to detect activity on the end device. If it lights up green, for example, the device is correctly connected to the network. A red signal indicates an error.

As long as the light is on, however, it means that there is at least communication between the device and the LAN distributor.

What is a LAN port?

Computers, servers and other network-enabled devices have a LAN port. This actually looks somewhat similar to the telephone connection. The RJ45 cable connector is a standard for a variety of devices.

After all, the LAN port only has the use of creating a wired access to a network. A wireless network cannot be established directly with it.

Are LAN and Ethernet the same thing?

Before we can answer this question, we must first clarify: What is Ethernet? Because the differences are small but still important.

Ethernet refers to a wired data transmission in a local area network (LAN). Devices within this environment are connected by a cable, the LAN cable.

However, this was initially only an all-encompassing synonym, a kind of generic term. Actually, only certain types of cable were referred to as Ethernet cables.

It was a copper cable twisted in itself. Data is forwarded in a standardized manner via this cable. The information is packed by Ethernet frames into a larger package, which contains checksums and MAC addresses in addition to the actual data.

In addition to the Ethernet standard, the Arcnet and Token Ring protocols also exist. However, these have been superseded by the Ethernet.

Try it for FREE

LAN cable vs. Ethernet cable: Is there a difference?

When buying a network cable, there is no difference between a LAN cable and an Ethernet cable. It is a twisted copper cable.

While LAN by definition describes a specific area – several hundred meters – Ethernet is about the type of cabling. In other words, the protocols behind it or the defined plug connection.

However, since the two terms are used synonymously, there are no differences at all when it comes to acquisition.

A patch cable is also a network cable. Although there is no exact definition for it, this term usually refers to short conductors. They usually refer to cables that are not permanently installed and are therefore often used in offices and the like.

They are also used to connect devices within a network. Their short length is a characteristic feature.

They can be purchased pre-terminated, i.e. assembled. Installation cables are often delivered without RJ45 cable connectors and have to be adapted afterward. Nowadays, however, the manufacturing quality is so high that there is basically nothing to be said against buying “ready-made” patch cables.

What is the difference between a LAN cable and Wifi?

The biggest difference between a LAN cable and Wifi is the physicality. In the truest sense of the word. Because while LAN is a physical interconnected network, Wifi is a wireless network.

Wi-Fi (Wireless Fidelity) is a standard assigned to devices that can receive WLAN (Wireless Local Area Network). This standard is certified by the Wi-Fi Alliance, an association of companies that research in this field.

Although often used in the same breath, Wifi and WLAN are not the same things. Strictly speaking, the latter is the generic term for wireless local area networks. With WiFi, one speaks of the device standard.

LAN vs. WLAN: Which is faster?

LAN cables have much more to offer in terms of transmission speed than WLAN. Modern standards allow a rate of 40 Gb/s in the wired network. That is many times more than is possible in wireless networks.

Even with the latest Wi-Fi 6 standard (WLAN AX), data streams of up to 9.6 Gb/s can be achieved. However, this is only a theoretical value, since it cannot be achieved in real environments due to external interference factors.

There are roughly two materials used for LAN cables: copper and fiber optics. Fiber optic cables are not only faster and have a higher transmission rate, but are also significantly thinner. Furthermore, they are less susceptible to interference. However, they are a little more costly.

You can find out more about single mode vs. multimode fiber here.

Ethernet cables have some advantages compared to other types of transmission.

However, there are also disadvantages with LAN networks, which are:

However, wired network connections are clearly superior to WLAN environments in terms of security. Cracking attacks can be used to access the wireless network from outside. Jammer attacks can also be used to disrupt or even completely paralyze the WLAN signal.

For jamming attacks on the LAN, the hacker would need physical access to the network.

What should I look for before buying?

There is no general answer to the question « What should I look for when buying LAN cables? ». It depends strongly on the conditions of the own network.

SF/FTP cables are recommended to avoid interference as much as possible. They are twisted, shielded and have double protection to the outside. Cat6 cables are now the common standard and can be used in both private and business environments.

What is a LAN cable? Summary

LAN cables are used to connect different network components. These can be computers, switches, routers or printers. LAN stands for Local Area Network.

Ethernet cables can have different lengths, colors and transmission speeds. But they all have one thing in common: they have an RJ45 connector at both ends. This connects the devices to each other.

Because of the physical link between the devices, the network is less susceptible to interference and more secure against hacker attacks.