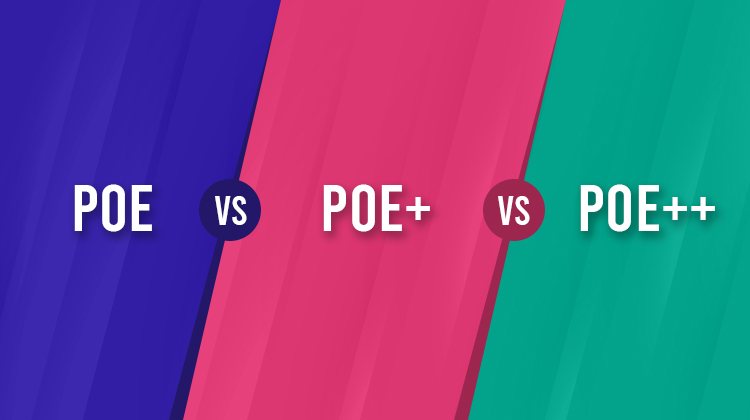 Power over Ethernet, PoE for short, is a standard that has proven itself for years. With this technology, devices can be supplied with both data and power, saving both space and cost. You can find out more in this blog post. This time our focus is on PoE vs. PoE+ vs. PoE++.

If you have ever been involved in buying switches or other network devices, you will have noticed before that there is not only one type of this technology.

PoE, PoE+, PoE++ (4PPoE): What is the difference? Which variant is right for your IT environment?

Install Hardware faster than ever! Let the Setup.exe, our hardware installation tool, carry heavy and expensive hardware for you.

What is PoE+? Power Over Ethernet Type 2 simple explanation

When this type of power and data transmission was introduced to the IT world in 2003, the IEEE 802.3af standard at that time delivered up to 12.95 watts to a device. This is without doubt sufficient power for the powered devices (PD) of the early 2000s.

Therefore, with 802.3at, now known as PoE+, a new standard was introduced from 2009. This enables a maximum power consumption of 25.5 watts at the controlled device.

Another advantage of the 2009 variant is the available voltage range both at the port and at the PD.

With the 802.3af standard, a voltage between 44 to 57 volts can be generated at the port. With PoE+, on the other hand, the voltage generated lies between 50 and 57 volts.

When do I need PoE+?

As earlier mentioned, more powerful devices can be integrated into the network due to the increased performance. If we first look at PoE vs. PoE+, there are clear distinctions.

Thanks to its higher wattage, 802.3at technology is capable of supplying video IP telephones or state-of-the-art cameras with power and data. Multi components alarm systems can be integrated as well.

In comparison, Power over Ethernet switches with the 802.3af standard can control voice over IP devices or access points. It is therefore particularly suitable for less powerful devices. Generally, one variant is not superior to the other.

PoE+: How many watt can I expect?

Finally, with the available energy that both PoE (15.4 W) and PoE+ (30 W) provide at the port itself, the power loss must be taken into account.

In some cases, less than 70 percent of the power is lost due to the heat generated at the data cable.

The smaller the wire cross-section and the longer the cable, the higher the power losses. In the end, the PD only receives a maximum of 12.95 or 25.5 watts.

The 30-watt standard, however, is downward compatible. On the contrary, this does not apply to “classic” Power over Ethernet switches.

Try our /dev/mount
for FREE!

Easier & faster than cage nuts. Request your free
sample pack and convince yourself!

Since many more powerful devices now draw their power via the data network, the 802.3bt standard was launched in 2018.

This is known as PoE++ or 4PPoE – derived from 4 Pair Power over Ethernet.

It not only supports 10GBASE-T, but also delivers twice as much power to the end device. Since all four wire pairs of a cable are used instead of just two, PDs can be driven with up to 71 watts.

However, this is only possible if the PoE++ technology is type 4. Type 3 switches can transmit power either via two or four twisted pairs. This amounts to a maximum of 51 watts. The port itself delivers 60 or 100 watts with type 4.

What do I use it for?

PoE++ capable switches are mainly suitable for IT environments with high power requirements. Projectors or even laptops can be supplied with power via a Type 3 standard data cable.

Although for larger and more powerful devices, 4PPoE should be used, in which all four wire pairs are used. In this way, for example, televisions or video conferencing systems can be stably integrated.

The following information and standards can be helpful when setting up IT infrastructures. Here, you will find an overview of PoE vs. PoE+ vs. PoE++.

Comparison of the four Power Over Ethernet standards

The biggest differences between these three types of switches lie in the IEEE standards. While PoE supports 802.3af, PoE+ runs on 802.3at and PoE++ on 802.3bt.

The cable technology used can therefore also be mentioned in the same breath, because on the one hand, PoE and PoE+ switches use only two of the four twisted pairs of wires.

4PPoE, as mentioned before, uses all four pairs of wires. This means that far more electrons can be transmitted via the Ethernet cable.

Consequently, in addition to faster data exchange – it supports 10GBASE-T. These switches can also deliver more power to the end devices.

With devices that support type 4, we have almost five times as much performance available at once. Even the jump from PoE+ to PoE++ (type 3) is twice as large in terms of wattage at the PD.

Therefore, with 802.3af, mainly low-voltage devices such as smaller sensors or access points are controlled.

The 802.3at standard, on the one hand, can supply video IP telephones or more complex surveillance cameras with power and data.

PoE++ switches can integrate televisions or video conferencing systems into the network without needing an additional power supply.

the most innovative
network cabling system

Nonetheless, all these advantages of PoE, PoE+ and PoE++ regarding their performance should be taken with a grain of salt because these figures are theoretically possible.

Not all controlled devices use the available capacities to the full. For example, a switch that supports the 802.3bt standard (type 4) on all ports cannot run 24/7 at high performance.

The aforementioned power dissipation due to cables and distance reduces the possible energy supply by at least 30 percent.

In this respect, the performance of the powered devices should be added up when setting up the IT environment. Based on this, the number of ports should be decided according to the respective PoE standards.

Likewise, no economization should be made on cables. Category 5 Ethernet cables are a good basis here.

However, due to the larger wire cross-section and the associated resistance, Cat6a patch cables, such as those found in the PATCHBOX, are more suitable for PoE+ and PoE++ applications.

Thanks to PATCHBOX’s retractable cables, cable clutter in the network cabinet is a thing of the past. Faster installation, faster troubleshooting, better air circulation and much more – see for yourself!